Shannen Fields is a devout Christian, actress, producer, model and inspirational speaker. Born and raised in Albany, Georgia, she has been married to Jimmy Fields, the love of her life, for 39 years. Together they have raised two children; Jay & Mallory.

Fields pursued the acting world beginning in her early 20s. Although Fields lived a fulfilled life- married with children- she felt as if something was missing. She had the desire to pursue acting but didn’t know where to start. She made the bold decision to seek acting auditions on her own and was unsuccessful at every turn. Ultimately, the decision to prayerfully seek God’s wisdom is when doors began to open for her.

It wasn’t until Fields met the Kendrick brothers, Christian American film writers and producers, that Fields got her “big break” and premiered on her first feature film “Flywheel.”  The 2003 American Christian drama film tells the story of a dishonest used car salesman who suddenly turns honest and starts living his life to please God. Although Fields had very few lines in the film, it was the big break she had been praying to God for.

After the film Flywheel, more doors began to open for Fields. She was cast in many lead roles movies such as “Facing the Giants” in 2006, “Suing the Devil” in 2010 and “Rumors of Wars” in 2014. Most recently, Fields has starred in the pro-life film “Order of Rights” which has since been released on October 2020.

“Order of Rights” centers around pregnant Emma Stein, who is encouraged by her pro-choice mother, Kerri Stein (played by Shannen Fields) to have an abortion despite the objection of the child’s biological father, Ethan Carpenter. The drama in the story escalates when Ethan and his family file a lawsuit on behalf of the child’s right to life. The case takes on a media frenzy and makes headlines. The narrative of the story is mainly centered in the courtroom, as the unborn child’s rights are debated from the perspective of the Declaration of Independence. The title, ‘Order of Rights’ refers to the order in which the categories of rights are deliberately listed in the document: Life, Liberty and Pursuit of Happiness.

Fields discussed with Politifix News how starring in this controversial pro-life film not only further strengthen her relationship with God, but also strengthen her pro-life views.

Abortion is a controversial topic among all sides of the political spectrum. Fields was questioned by Politifix News if abortion should be acceptable in cases of incest and rape; an argument used by pro-choice activists when justifying abortion. Fields responded with the following:

“I am sympathetic to the sexual abuse the mother of the unborn child has endured, however the unborn child should not have to face a death sentence for a crime they didn’t commit. Regardless of how a child was conceived, that doesn’t devalue their human life. A life is a life. A child deserves a chance to live and to see what God has created for him or her to be.” Exclaimed Fields.

Christians considering a career in acting must consider the bearing their roles will have on themselves spiritually and how they will be viewed by others. Fields encourages those interested in acting to never compromise their Christian values and beliefs for the sake of fame.

“Dream big, but take the Lord with you wherever you go. Never be afraid to say NO. Know the word of God before you go into acting. Seek the Lord for every project that comes your way,” stated Fields.

Fields is devoted to spreading God’s message through her acting. She is committed to staying true to her Christian principles. She plans on working on more Christian films in the near future in the hopes to inspire and bring more people closer to God. 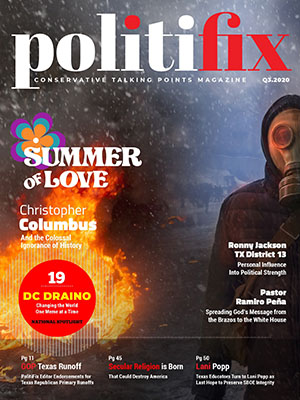 Heath Barnes: As a Gay Republican Man the LGBT Community No Longer Represents Me

Anna Paulina Luna: Discipline, Duty, and a Commitment to Country Before Politics

Grant Godwin: It’s a Meme World Out There